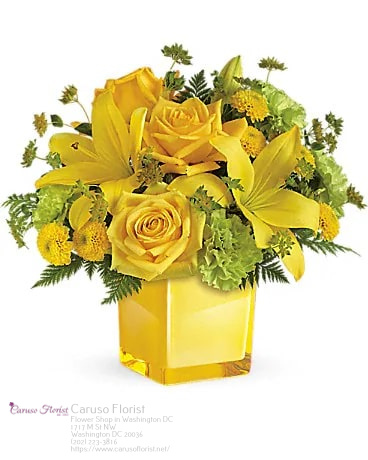 Call Caruso Florist the flower delivery experts in Potomac MD or surrounding areas today for your free estimate or if you have any questions, give us a call at (202)223-3816

Find A Florist In Potomac MD

Anemone (Greek). These charming red blooms are said to have been borne of the tragic love story of Adonis and Aphrodite. Now you may recognize Adonis as the pinnacle of macho beauty in mythology, frequently compared to swoon-worthy men - and you're right! In fact, he was so handsome that he swept Aphrodite, the Goddess of Love herself, off her feet. She was so madly in love that she ignored her godly duties and even her own appearance. One day, he went hunting and stabbed a wild boar with his spear. Much to his surprise, the boar suddenly charged after him and plowed him with its tusks. Aphrodite heard his painful howls and ran to be by his side, holding him as he bled to death. Grieving the loss of her mortal lover, the goddess sowed nectar on his blood, where dark red anemones later emerged as a symbol of her grief. In other versions of this tale, the flowers sprang from Aphrodite's tears mixed with Adonis' blood. Anemones still signify death, grief, and forsaken love to this day. But to put a more positive spin on this, these blooms remind us that life is fleeting, so we must treasure every moment with our loved ones. Chrysanthemum (German). While the chrysanthemum features more heavily in Eastern folklore, specifically in Japanese culture, this brilliant and joyful flower has a really special meaning in a famed German legend. On a deathly cold Christmas eve, a poor family gathered around their table to share a measly meal. Their calm night was interrupted by loud, repeated cries from outside their home. Curious, they opened the door to find a trembling beggar who was turning blue from the unforgiving winter. They led him inside instantly and wrapped him in blankets to warm him up. They offered what scarce food they had for him to eat and be filled. The man then removed the blankets to show his bright white clothes and a halo on his head. Lo and behold, he was the Christ Child in flesh. Upon revealing himself, he left. The only thing that remained of him was two chrysanthemums where he had stood. Until today, Germans fulfill the practice of bringing chrysanthemums into their home every Christmas eve to revere Christ. While this is a rich cultural custom, the call to be charitable and compassionate even through hard times rings true for every person.

Lotus (Egyptian). A gorgeous flower that flourishes in full bloom from murky waters, the lotus is considered a symbol of purity, rebirth, and inner strength. This view is shared by many cultures, but its earliest date goes back to Ancient Egyptian mythology. The god Nefertum was thought to have been born from a lotus flower, rising from the waters at the beginning of time. Known as the sun god, he was heavily linked to the lotus in several Egyptian myths. In particular, he was associated with the blue lotus: its golden center was evocative of the sun's shining rays, while its vivid blue petals were compared to the vast skies. The similarities of the sun and the lotus have a particularly significant and inspiring meaning. Just like the sun that rises and falls every day, the lotus opens its buds at daytime and closes them at night, representing the cycle of life, of death and rebirth. In addition, Nefertum was also worshipped as the god of healing and beauty, further affirming his connection with the marvels of life: not only with its beginnings and endings, but with upholding and enriching it. Narcissus (Greek). There's a good reason why the term "narcissist" is named after the mythological origin of this flower. Narcissist generally refers to someone who is so vain and self-absorbed that they lose sight of the world around them, much like the hunter called Narcissus in Greek mythology. While admired by many for his awe-striking looks, Narcissus expressed great disdain for anyone who became taken with him. One day, the mountain nymph Echo saw him, instantly fell in love, and followed him. But he eventually caught on and demanded to meet her. Echo revealed herself, throwing her arms around him in joy. Narcissus viciously rebuffed her and broke away from her. The distressed Echo hid in great shame for the remainder of her days, never to be seen again, with only an echo of her voice left lingering. Nemesis, the goddess of revenge, decided to punish Narcissus for his callousness. Dooming him to love what he cannot have, she led him to a stream where he fell in love with his own reflection. He stayed by the water staring at himself until he withered away from thirst and starvation. A white flower with a yellow heart later bloomed where he died, warning us about the pitfalls of treating others with cruelty and putting ourselves above everyone else.


Rose (Roman). Arguably the world's most famous flower, the rose has been a constant image in folklore and mythology across several cultures. But one universal symbolism they carry is that of true, fervent, boundless love. This is never clearer than in the romantic tale of Cupid and Psyche. The youngest of three princesses, Psyche was a girl of astounding beauty, loved and idolized by many people. Their adoration reached a point where they abandoned worshipping Venus, the goddess of beauty. Overcome with jealousy, Venus enlisted the service of her son, Cupid, in her crusade for revenge. But upon setting out for his task, he fell in love with Psyche. The smitten Cupid escaped with her to his secluded palace, but warned her never to look at him. However, Psyche's jealous sisters found her and tricked her into gazing at him. Enraged, Cupid fled from her. Grieving the loss of her lover, Psyche eventually became a servant for Venus. The goddess subjected her to many tests and torments, all of which she endured for love. Cupid then rescued Psyche and appealed to Jupiter, king of the gods, to marry her. Jupiter was strongly moved by their love and promptly expressed his favor. Their wedding was a splendid celebration in the heavens, attended by all gods. Jupiter asked his daughters to sprinkle the most gorgeous, breathtaking roses all over the earth to honor their union. At the heart of this fascinating story is the age-old but undoubtedly true message: true love conquers all. It can survive all difficulties and hardships, because reaping the rewards of being with the people we love is more than enough to keep us going.

Are you in Potomac Maryland, near Washington DC area and are looking for a business that does flower delivery near you? Are you interested in having fresh flowers delivered? If the answer is yes, you have found a great resource to take care of all your florist needs. We are the best florist in Potomac Maryland. No arrangement is too big or too small for us. We provide full-service floristry services.

Handy Guide To Keeping Flowers Fresh For Longer. Why Bloom Care Makes All The Difference. There's nothing like a bouquet of flowers to brighten your mood and liven up your home! Plus, it's also among the most special and heartwarming gifts we can receive on special occasions. Sadly, we all know that flowers don't last forever. But with a little effort and a good deal of TLC, you can keep your beloved blossoms fresh and blooming for longer! We've come up with a simple guideline to help you preserve your beloved flowers' vibrance for a long time. Enjoy your lovely bouquet to the fullest by following these easy steps! If you're interested in a formal course or want to get certified as an expert on all things about flowers, we recommend looking into professional bodies and colleges in gardening and floristry such as the American Institute of Floral Designers of the AIFD (www.aifd.org), the American Floral Endowment (www.endowment.org), and other similar organizations offering programs specializing in floristry. Clean your vase. Containers accumulate a lot of dust and dirt that can make your water cloudy and infect your flowers. Even if your vase is newly-bought, be sure to wash it for safety. Cleaning your vase is actually easy and inexpensive - you'll have all you need around the house! Just wash with warm water, a lid of bleach, and let it dry. Another homemade cleaning solution is a salt and vinegar paste. Just mix a tablespoon of salt with a tablespoon of vinegar, apply the mixture to your vase with a clean cloth or brush, and let it set for half an hour. Afterwards, wipe it off until all residue is removed, rinse out with lukewarm water, and leave to dry. Add flower food. Yep, you read it right: cut flowers need food, too! It allows them to bloom in full health and helps avoid infections that can shorten their lifespan. Flower food has three components: 1) citric acid, which balances the pH level of water for ideal health; 2) sugar, which boosts their energy; and 3) bleach, which controls fungi and bacterial growth. Your local nursery or online stores may have flower food packets readily available. But if you want to make your own at home, the recipe is easy to follow! All you need is 1 quart of water, 1 tablespoon of sugar, 1/2 teaspoon of bleach, and 2 tablespoons of lemon juice. There are also loads of substitutes to this recipe! Clear soda, apple cider vinegar, and even vodka have been proven successful at nourishing flowers. Prune away. Leaves and foliage that are left behind on the stems and soaked in water will rot quickly, introducing bacteria to your flowers which can cause disease and infection. So it's a good idea to prune your flowers before placing them in your vase and make sure that there are no leaves below the waterline.